Midwest riders where are you

You are using an out of date browser. It may not display this or other websites correctly.
You should upgrade or use an alternative browser.

Mitch said:
Iowa is much the same. However, in my section, which is the NE part of the state, we have some very pretty, winding, rolling, hilly, wooded areas. I like it!
Click to expand...

Easter Iowa is awesome. I love hitting B/C Roads around Bellevue....
Reactions: Mitch

Juice said:
Easter Iowa is awesome. I love hitting B/C Roads around Bellevue....
Click to expand...

Gets even better NW of Dubuque. There's some great back roads and lots of good gravel. Stop in Balltown at Breitbach's for lunch.
Reactions: Rethy and Juice

I assume you are talking about Lea Rieck, quite an adventure she went on. I also like Rosie Gabrielle's videos with great topics like "How I didn't die" and "Why I do it 'wrong,' Adventure Riding the Rosie Way."
But I am guessing Lea never spent any time riding around some of the Eastern Plains of Colorado (affectionally known as West Kansas) and traveling between places like Limon and Ordway, where the metropolis of Punkin Center is your highlight of that stretch
Reactions: Mitch

Yes, I was referring to Lea. I am also very familiar with Gabrielle and her journeys. In fact. Gabrielle rode a KLR for much of her trip in Asia. Her lack of skill and prep was hard to watch on YouTube. I am a former KLR owner and still spend some time on the KLR650.net site. One night we were talking about Gabrielle and some were being pretty critical......The next day Gabrielle shows up on the forum and put the boys in their places. She explained that although she clearly was lacking in skill, she was proud of the fact that she decided to not let fear or excuse stop her. She also shared that she has a chronic disease that is quite painful, but that she decided some time ago that she would not allow her illness to limit her. You have to respect her spirit. There are a few other single young women like Lea and Gabrielle that have completed trans con and even trans world rides. It's impressive.

EDIT....Just watched the video link in your post. That's one of the videos I watched before. Hard to watch her struggle. But after her explanation, it's actually pretty impressive....and still a wee bit crazy too.

I have never ridden across KS on a bike, but I have driven the length of I-70 across KS, I-80 across NE, and I-90 across SD. In all three cases suicide became a real option about half way across each of them. HOLY CRAP! Those are long, boring stretches of highway.
Last edited: Dec 19, 2017

I used to have to drive between Colorado and Pittsburgh regularly. We had a family owned business based in Pittsburgh and back when my mother was still involved, she was terrified of flying. So we made regular trips between here and Pittsburgh by car. It was mindbogglingly boring at times to where I would mix it up, sometimes taking I-70 and sometimes I-80 through Nebraska. I can't say either one was all that enjoyable. Smarted thing I ever did was get XM/Sirius at the time, otherwise it would have been flat boring terrain and listening to Agricultural Reports The worst trip I ever made across Kansas was when I first moved here. I came across Kansas at night and it was pitch black. The only thing visible was the road directly in front of me and the occasional tumble weed. I really learned the meaning of white line fever on that trip. I was so excited when I saw the sign for the Colorado border, only to find it was just more of the same until you get closer to Denver

Luckily I have never been across Kansas on I-70 by motorcycle. I have a serious allergy to any road beginning with "I" while on my motorcycle. My wife and I recently took a trip to the Ozarks, but we took 287 to Limon, 287 through Kit Carson and Lamar and then 400 out through Dodge City, before dropping even further north.

I have been across NE and SD, NE particularly on the way to the Black Hills. I go there frequently, but that is generally as far as I go

However we did take a trip to the UP and back a couple of years ago and did do some riding through SD, WI, MN, IA, IN, IL MI. There are definitely some boring stretches through NE and SD, but also some cool sights off the beaten path such as Carhenge in Alliance, NE and 1880's Town in Murdo, SD 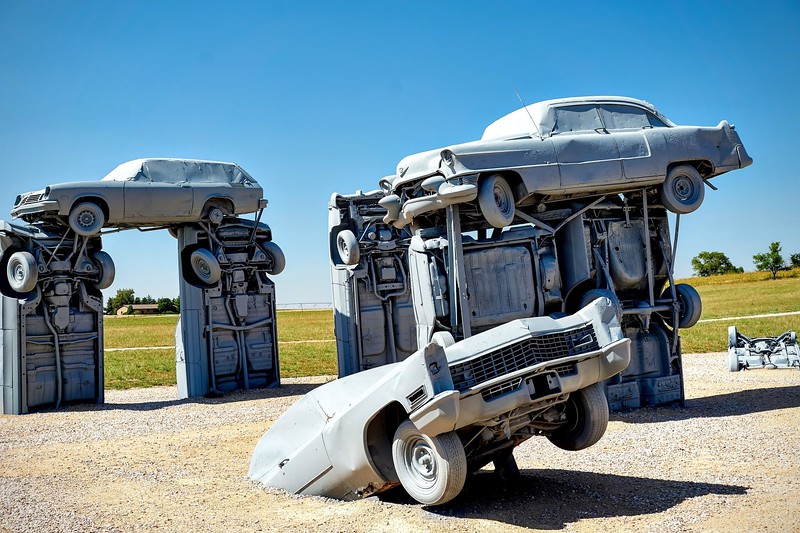 Oh and on the other bit. I agree with you about Gabrielle. Part of what makes her journey so appealing to watch, is just how unprepared she was, but didn't let it deter her from her dream of doing it. It was painful at times. Watching her in her tent, out in the middle of nowhere, videoing her monologue... it at times reminded me of the Blair Witch Project hahaha. But I enjoyed it.

Another than I a little more familiar with is Weronika Kwapisz, a young polish women who did a 12K+ solo trip across the US on her Bonneville. She posted some on the Triumph forum I admin and I believe a few of the folks rode some stretches with her.

A good book on globe trotting journeys is Rene Cormier's "The University of Gravel Roads: Global Lessons From a 4 Year motorcycle Adventure." He sells everything he owns to go off the grid for a 4 year, 41-country, 154,000-kilometer (95,000-mile) adventure. One of the funnier parts in the book is when he talks about learning that Ewan McGregor and Charlie Borman were nearby as a part of their Long Way Around adventure. Not because he was particularly excited about the idea of meeting them, but he wondered if he could rob some parts and supplies from their support vehicles hahaha

Wow this thread kinda died! Be nice to see it resume.
Im from central Indiana.

Sent from my SM-G965U using Tapatalk
Click to expand...

Where about in Central Indiana? I’m about 12 miles east of Lafayette.